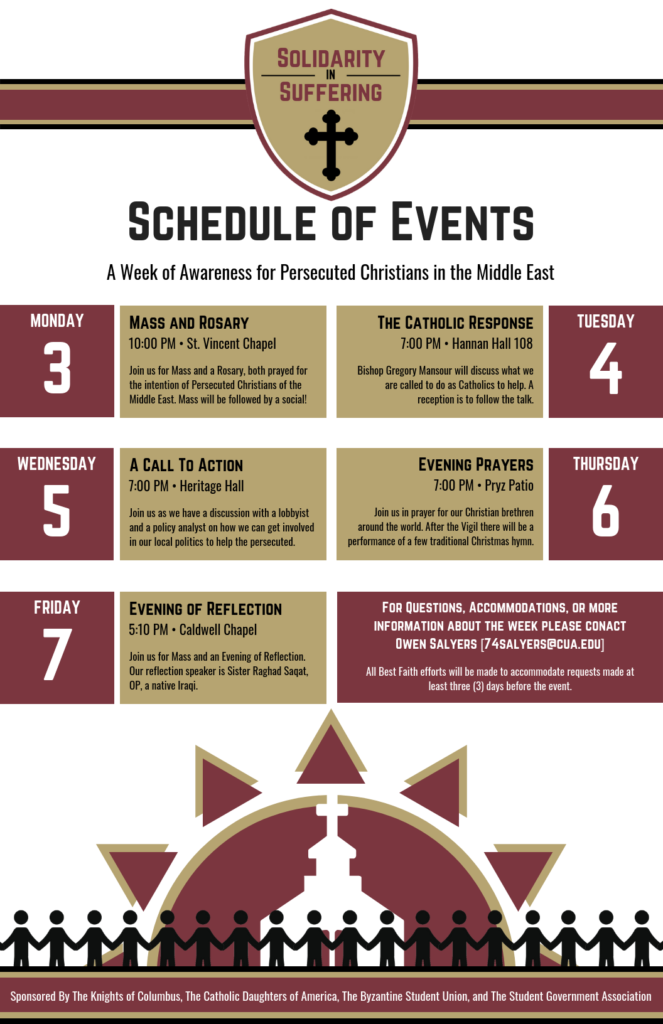 Courtesy of Owen Salyers. Schedule of Events for Awareness of Persecuted Christians Week

Universal. This definition of the word “catholic” has stuck with me throughout my Catholic school education. It is a word that we are confronted with every day, and a word with which we associate a community, whether it be Church or School – and a word which carries the weight of the world behind it. So take a moment and close your eyes.  What do you think about when you hear the word ‘Catholic’? How about the word ‘Christian’?

Did you think of a persecuted Church? Did you think of a faith which has been persecuted to almost the point of no return in countries around the world? According to a report published last year by Aid to the Church in Need, the situation for Christians in almost every country they reviewed has declined since 2015 as a result of violence and oppression.

In the Middle East, a genocide has been occurring. The United Nations continually fails to recognize this genocide on an international level. So it is time for us to act. Just last year, the current administration renewed its commitment to the protect religious minority groups threatened by violent transgressors in the Middle East. Former Secretary of State Rex Tillerson declared this persecution for what it was – genocide. Vice President Mike Pence announced last October that United States Agency for International Development (USAID) will be providing direct assistance to religious minorities being targeted by violent transgressors in the area, thus circumventing the United Nations reluctance to act. The United States is aiding those persecuted minorities, but what can we do?

I first asked myself this very question last year when I began to learn about the current state of affairs for Christians in the Middle East. Last year the United States Conference of Catholic Bishops (USCCB), recognizing the need for an answer to this very question, called on Catholic institutions in the Untied States to observe a week of “Solidarity in Suffering”. This week would aim to inform and raise awareness for the current plight of persecuted Christians in the Middle East. The Knights of Columbus and the Student Government Association stepped up to the plate, and we established a week of events to raise awareness about the plight of our brothers and sisters around the world who are persecuted for their faith, focusing on Persecuted Christians of the Middle East.

Yet again we have stepped up to the plate, expanding on the events we had last year.

This year’s week of events is co-sponsored by The Knights of Columbus, The Catholic Daughters of the Americas, The Byzantine Student Union, and The Student Government Association. We have re-focused the intention of the week to focus on the plight of all persecuted Christians around the world. Our Tuesday event will focus on what the Catholic Church calls on us to do for our brothers and sisters and we will be hearing from former University Trustee and current Eparchy of Saint Maron of Brooklyn, The Most Reverend Gregory Mansour. Our Wednesday event will feature a lobbyist and an analyst as we work to understand how we can encourage our government to engage in assisting our brothers and sisters in need.

I encourage each of you to get engaged, be involved, and be aware. Please join us next week as we raise awareness and get involved – Every voice deserves to be heard and every life deserves to be saved.