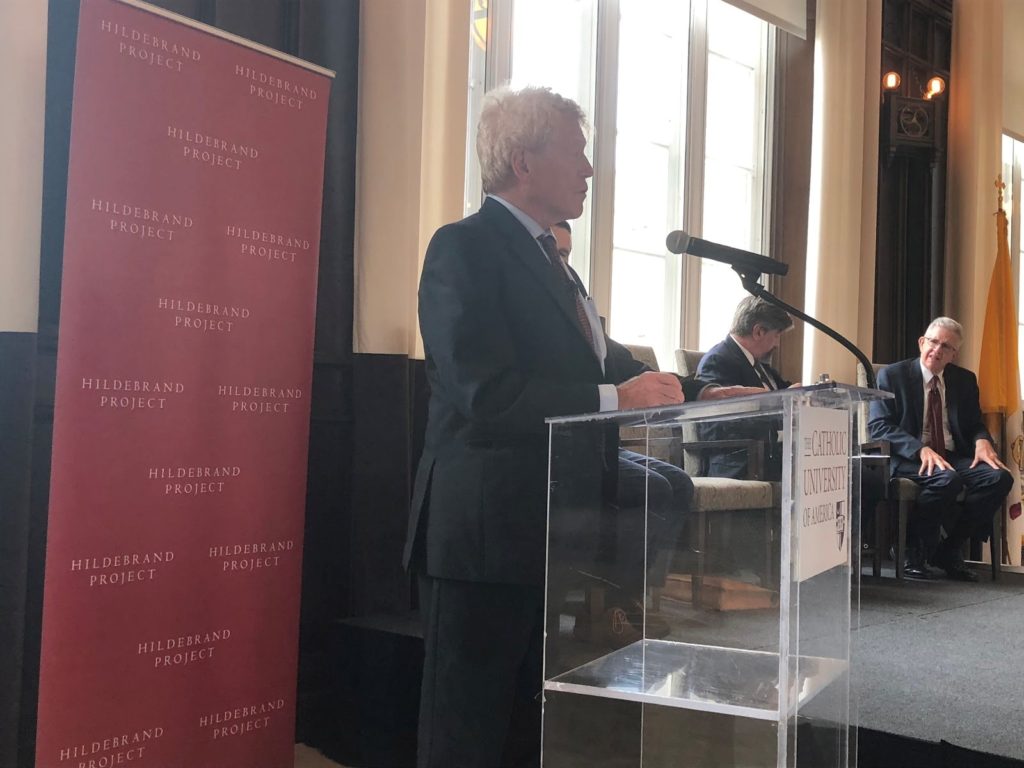 Acclaimed British philosopher and writer Sir Roger Scruton is recognized as a premier conservative thinker a polemicist and was knighted by Queen Elizabeth II in 2016 for his “services to philosophy, teaching and public education.” He also gave a lecture in Heritage Hall on Wednesday, October 10, focusing on finding beauty in a world of ugliness.

Sir Roger’s goal for the event, as he put it, was to “introduce the discussion with a few remarks about what ugliness is…and the way in which ugliness has come into our world as an inevitable force, a force that seems to squeeze itself into every opening that is available to it…”  Scruton commented on how our “uglified world” focuses on the self and clamors for attention, while rejecting judgment from others. From postmodernism in the creative arts, to radicalization of the political process, to the deconsecration of sacred things such as birth, death, and reproduction, he lamented the loss of beauty in a world in which people “annihilate their surroundings.”

As Scruton proceeded in his talk, the audience listened attentively.  It was then opened up to questions from the panel and audience, which was comprised of roughly 200 students, religious, and spectators interested in Sir Scruton’s talk.

Co-sponsoring the event with the Philosophy Department was the Hildebrand Project, the organization responsible for the translation and dissemination of the works of Catholic theologian Dietrich von Hildebrand.  Von Hildebrand discovered philosophy reading the Platonic dialogues as a teenager, and converted to the Catholic faith by means of beauty. At the age of 80 he wrote his philosophical work Aesthetics, and Volume II of this work, which is due to come out in November, has a foreword authored by Scruton.

Moderating the event was John Henry Crosby, founder of the Hildebrand Project.  On the panel was John F. Crosby, father of John Henry and student of Dietrich von Hildebrand, as well as D.C. Schindler, Associate Professor of Metaphysics and Anthropology at the Pontifical John Paul II Institute for Studies on Marriage and Family.

Will Pinhak, a senior architecture and civil engineering dual-major felt the talk resounded with ideas being presented in his classes.

“As a part of this discussion, the speakers noted that more contemporary buildings tend to be focused more upon function and programmatic aspects as opposed to beauty,” Pinhak said.  “This topic has been a common one discussed in my studio classes in the past year.”

Sir Roger concluded his lecture by speaking of the need to, “re-consecrate the world as a place where we can belong as complete beings, and belong to others and the community around us and to the world as a whole.”

The beautiful, Scruton seemed to conclude, and especially the realization of the beautiful, is lacking in today’s world – a world which is overrun by ugliness – and people are starting to realize this.

McCarthy noted that another work of Dietrich von Hildebrand, titled What is Philosophy? the introduction of which is written by Catholic University’s own Monsignor Robert Sokolowski, will be coming out in the spring.