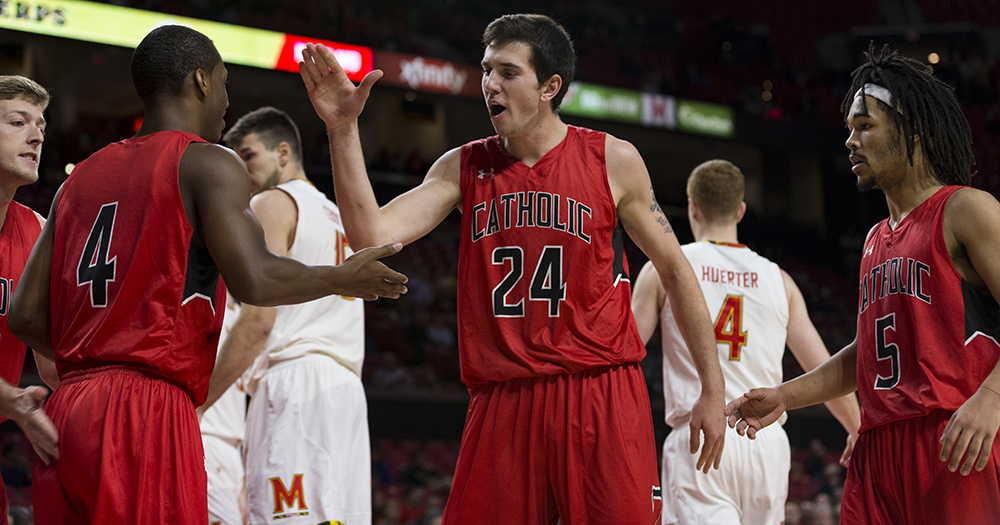 Catholic University Men’s Basketball (2-3) fell to DeSales University 81-67 on Monday night at Franny Murray Court. The Cardinals may have lost, but they put in the maximum effort having four lead changes and two ties over the duration of the game. Senior Andre Mitchell and freshman Will Mulquin had double digit efforts in the match, with 14 and 13 points respectfully. Juniors Riley Hayes and Collin Hartmann also put up 10 and 11 points.

DeSales quickly mounted a big lead on the Cardinals, going up 21-9 after the first 7 minutes. The Cardinals did not give up, putting up 16 points to grab a 25-24 lead. This lead, however, did not last very long and the first half ended with the Bulldogs ahead 41-34.

The Cardinals did not lay down and let their opponent take over in the second half. Catholic came out of the locker room swinging, putting up 13 points and trying the game 47-47 with less than 14 minutes left in the half. The Bulldogs responded with 10 unanswered points. The Cardinals tried to rally, but they could not overcome the deficit, and fell to the Bulldogs 81-67.

Catholic University’s biggest issue in the game was being out rebounded 52-36. The Cardinals also struggled with their free throws, making 56% of them, or 14 of 25. Catholic struggled with putting the rock in the basket, making only 22 of 67 for their regular shots, just 32.8%. It is not all doom and gloom, as the Cardinals secured 16 turnovers and produced 12 points off of the mistakes of the Bulldogs. Catholic University’s depth is also looking good, getting 29 of their points from players off the bench, including the double digit efforts from Hartmann and Mulquin.

The Cardinals play Drew on Franny Murray Court at 4pm on Saturday. This will be the first Landmark Conference game for the team. The Cardinals were 9-5 in conference games last year, but lost the two games against Drew by a combined total of 9 points.