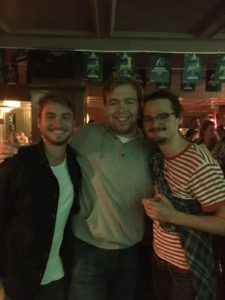 When people hear that you’re an American while abroad, and it’ll probably be obvious because our accents are pretty distinct, chances are that they’ll ask you about Trump. That’s the first thing I learned when I came to Galway, Ireland. Despite this, I’ve learned to have really cool conversations with people from across the world about our homes, the things that make us different, and the similarities that bind us.

This is my second trip to Ireland, the first being a rugby competition in high school, and I knew the first time being here that I’m return at some point. My family emigrated from Mayo after the Great Famine, about an hour north of Galway, and one of my roommates grew up there.

For the semester I’m studying Irish history, archeology, religion, and culture. I decided to just learn Irish stuff because I have to fill the humanities requirements anyway and might as well understand a culture. Since being here I’ve been on a geophysical survey trip, step danced with an instructor, and had to sing in front of a class of 40 people. Never have I thought I’d do those things, but because I’m abroad I feel more okay doing things that are outside of my comfort zone.

I joined the archery team here because at Orientation they told us that we should participate in a sport even if we have no prior experience. I took that to heart and shot an arrow into the gymnasium wall on my first attempt. I’ve since gotten it under control, and am currently in the third round of a University-wide competition to compete nationally. I’ve met new friends here from Ireland, the US, and across Europe participating in Erasmus, which is a European exchange program that swaps college students across countries.

Life in Galway seems like life in America, but there’s slight differences that make it obvious you’re not. The weather here is overwhelmingly cloudy, cold, and slightly raining. Sometimes there’s sun, and it’s incredible. There’s the E.U. green exit signs, fire blankets, Irish language plastered everywhere, and the ridiculousness surrounding hot water. Sinks have two separate faucets for hot and cold, so if you want to wash your hands they’re either encased in ice or you’re subject to second degree burns. I have no idea what the metric system is and am constantly confused by measurements. People smoke a lot everywhere even though cigarettes are €10 per pack, and drink everywhere even though alcohol is taxed incredibly high. Through embracing these differences I have learned patience, which is a virtue.

Not a lot of people from Catholic have participated in the exchange program at NUI Galway, but that shouldn’t discourage anyone from trying. I learned that if you have enough of a will to go somewhere, you’ll get there no matter how confusing the study abroad office is. Ireland is really an interesting place and I recommend anyone who can’t decide where to study abroad come here because the people are friendly, the sights are spectacular, and English is spoken.