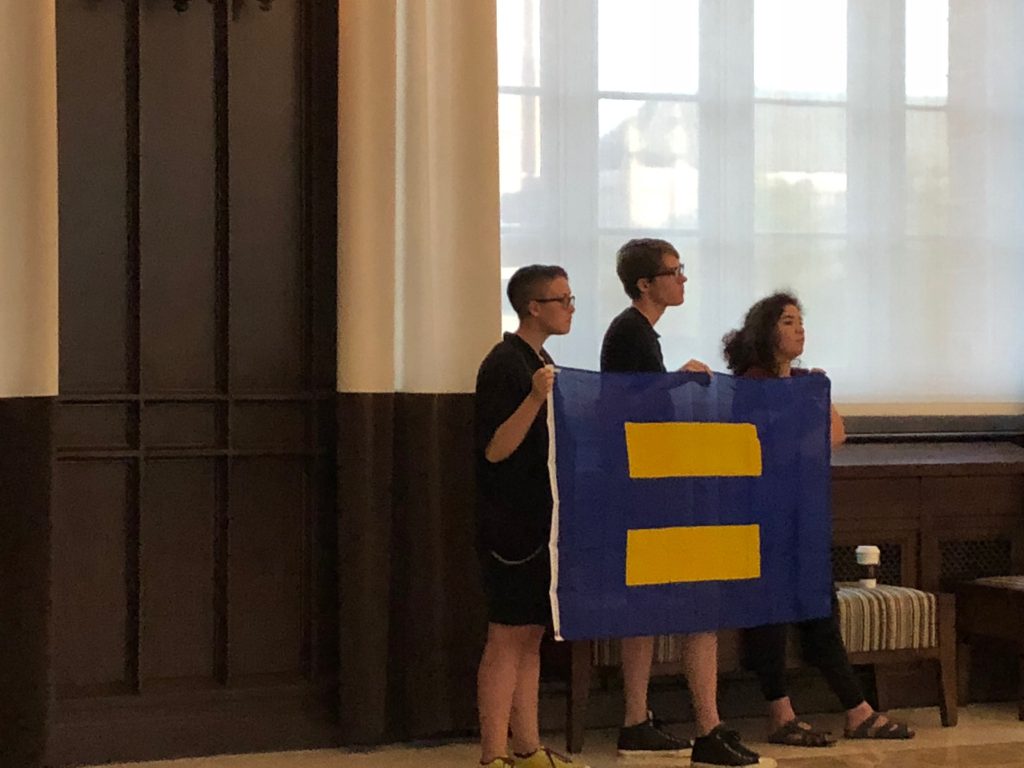 A discussion panel on transgender issues Thursday night sparked a silent protest by students opposed to the event.

The panelists presented their views on past and present discussions surrounding transgenderism.

Anderson expressed his views against current transgender trends, accrediting much of his research to Dr. Paul McHugh. McHugh’s writings on the topic have sparked criticism from the medical community, claiming his work is opinionated and not peer reviewed. Anderson did note that the issues and ideas of transgenderism should be separated from individuals who identify as transgender.

DeAngelo explained that regardless of a person’s gender identity, society must always recognize each person as “a child of God.” DeAngelo also explained that he does not advocate nor express opposition to individuals contemplating transitioning, reiterating a need to recognize the individual’s humanity.

Not all in packed audience were receptive to the content of the discussion. A group of three students, led by senior John Deckers, silently protested the event by standing in the back of Heritage Hall and holding up a Human Rights Campaign flag. The group protesting was not affiliated with an organization.

Some students who attended but were not involved in the protest shared concerns over the event.

“My main thought after was ‘why would [Anderson] choose to write an entire book on this,’” senior Bridie Bryant said. “I find it interesting he would chose to write a book on such a controversial topic.”

Other students questioned the work Anderson conducted in preparing the book.

“The research that he pulled was very inconclusive,” a transgender student who asked to be not identified said. “He even admitted that it was not cited.”

While LGBTQ student group CUAllies did not directly address last week’s event, they did reiterate they are a resource for anyone in need.

“For those looking for a safe space, know that CUAllies’ doors are always open,” Adriana Penafiel, president of CUAllies, said. “Take care of yourselves and know that this campus, this community is a better place because you are in it.”

In addition to CUAllies, the CUA Counseling Center offers individualized services to students, as well as Mosaic, a group therapy dedicated to LGBTQ issues. Transgender individuals can also find support from the Trans Lifeline, which can be reached at 877-565-8860.