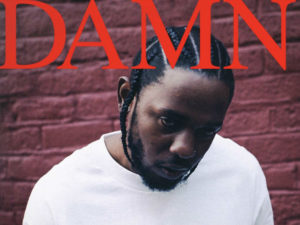 Before “HUMBLE.” decided to blow everyone’s speakers out two week ago, we hadn’t heard much from Kendrick Lamar. Last Spring, Kendrick gave us untitled unmastered., a surprise release with a list of nameless tracks, only distinguishable by the number that followed the word “untitled.” The album was good, coming with the classic Kendrick Lamar stamp, but, for some reason, the album wasn’t the follow up we expected after his phenomenal To Pimp a Butterfly.
But two weeks ago, Kendrick hit us with “HUMBLE.,” a shotgun of a song that, without any apology, hits hard and quickly. He released the music video at the same time, and if the lyrics aren’t enough to have you blasting his single out of your speakers, then both the creative directing and attention to detail of the video is enough to attract you. Contradictory to the song title, the music video is anything but humble. Kendrick plays a pope, Steve Jobs, takes the position of Jesus at the last supper — his crew playing his disciples — and flings dollar bills at the camera, while laying on a bed of dollars, while women count even more dollars in front of the camera. The video is a contradiction, but his statement to “be humble” is aimed at Big Sean for even thinking he could call Kendrick out for his rap game.
Kendrick’s new single set the bar, and left fans salivating for his new album. On April 14, Kendrick’s fans got DAMN.; being released on Good Friday, you could tell the rapper was making a statement. His statement does not revolve around one theme, but instead, multiple themes based on the positioning and title of each song. A thread of inner dialogue binds the album together, making it one cohesive work, which untitled unmastered. lacked. Kendrick develops a voice that stands in for the common liberal and conservative ideas that are so prevalent — especially amongst young Americans.
Songs like “DNA.,” “ELEMENT.,” and “XXX . (Feat. U2),” all develop the discourse between Kendrick and the American people, and that is why the album works as a whole. Instead of Kendrick pointing his finger at us and telling everyone in America whether they are right or wrong for what they believe in, he develops an alternate voice that directly speaks with him, mimicking the inner voice that meanders its way into all of our heads during a time of uneasiness and disjointedness. He does this all without deserting the lower-class Compton perspective that made his rap so essential in the progression of the genre today. Sure, Kendrick could win as many awards as he wants. Grammys and platinum records are wonderful for a musician, but Kendrick is more than a musician; he cares for the art. Kendrick takes the old school California beats that Dr. Dre shocked the genre with, and adds — with the help of his producer — his own spice to each beat.
The style Kendrick has developed is not lost in DAMN., and if anything, the album promotes the notion that Kendrick is trying to do something more than just talk about his astronomical amount of wealth attained in a short period of time. Kendrick, quite literally, has a conversation with himself in DAMN., and this conversation allows us — as well as Kendrick — to grow and discover new ideas and perspectives we can use in our own lives.
Tweet
Tags: Kendrick Lamar, music, Pierp Filpi, Rap

This is America: A Donald Glover Spotlight

King of the Cafe: Why Coffee Is, and Always Will Be, Superior to Tea

This is America: A Donald Glover Spotlight